Do you remember that pumpkin I bought in October? It’s been sitting on my kitchen counter for 5 months. This past weekend, I finally cooked, pureed, and froze it for future use. However, I did set aside one cup of puree to make pumpkin bread. March is definitely not the season for pumpkin bread, but that didn’t stop me from baking one of my favorite autumnal treats. I love the warm flavors of cinnamon, ginger, nutmeg, and cloves in pumpkin bread, but I decided to use less of these spices because it’s springtime! 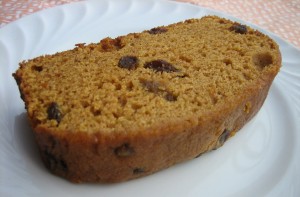 1. Preheat oven to 350°F and grease a 9×5-inch loaf pan. In a medium bowl, whisk together first 9 ingredients. In a small bowl, combine milk and vanilla.

2. In a large bowl, beat canola oil, flax seed meal, and sugar until mixed well. Beat in one egg at a time and then mix in pumpkin puree. After each addition: one third of the flour mixture, followed by half of the milk mixture, another third of the flour, the remaining milk, and the remaining flour mixture, beat on low speed until just combined and scrape the sides of the bowl as needed. Fold in ¼ cup raisins.

3. Pour into the loaf pan, sprinkle the remaining raisins on top, and gently press raisins down while spreading the batter evenly. Bake for about 1 hour or until a toothpick inserted in the center comes out clean. Let cool in the pan on a rack for 10 minutes before taking it out and cooling completely on the rack.

One thought on “Pumpkin Bread”